The vanity of American power 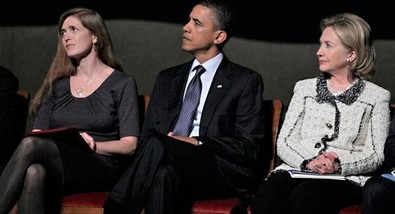 Politico magazine has a long interview with Samantha Power, U.S. ambassador to the U.N. in 2013-16, and Ben Rhodes, a speechwriter and adviser to President Obama. The occasion is a forthcoming HBO documentary on ‘The Final Year’ of the Obama administration, seen through the doings of these two functionaries.

The interviewer, Susan Glasser, starts with Samantha Power and “probably the most memorable scene to some people certainly—this incredible moment of election night in your big apartment in New York City, where you’re the ambassador to the United Nations.”

“Well,” says Samantha Power, “I’ve had a lot of bad ideas in my life, but none as immortalized as this one. I decided on election night to invite the 37 women ambassadors to the U.N., many of whom face struggles in their own foreign service, or at the U.N. of a kind that, as an American, I never did. And I thought what an amazing night for them. I mean, that’s what America represents to the world, when a glass ceiling is shattered in our country, it creates a whole new sense of possibility for people everywhere.”

Let’s pause. What an unattractive worldview this is, both patronizing and parochial. Samantha Power cannot help but cast her guests – these ambitious, accomplished women diplomats – as victims, apparently held down to serving coffee and doing the typing around the U.N. How amazing for these benighted foreigners to have Hilary Clinton come crashing through the glass ceiling of their cramped mental horizons.

Really? Had Mrs. Clinton won, would Ambassador Ambroisine Kpongo of the Central African Republic have been overly impressed, given that it was 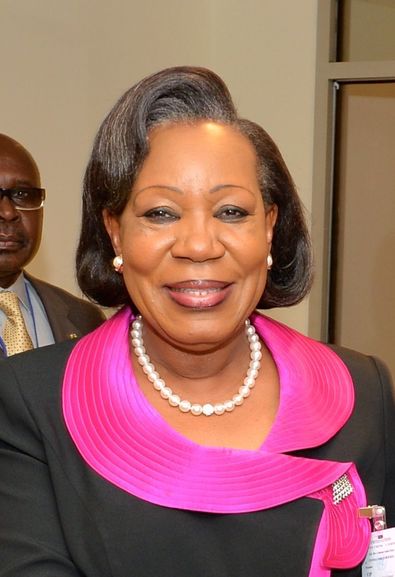 President Catherine Samba-Panza who appointed Ms. Kpongo to her U.N. position? Or Ambassador María Cristina Perceval of Argentina, a university professor, seasoned politician, administrator and human rights activist, appointed by President Cristina Fernández de Kirchner?  The first democratically elected female head of state in the world was Sirimavo Bandaranaike of Ceylon, in 1960, followed by Indira Gandhi of India in 1966, and Golda Meir of Israel in 1969.

No recognition for the accomplishments of those foreign women, though. Instead, we’re on to other rather shopworn attractions at Samantha Power’s election party:  “Madeleine Albright, our first woman secretary of state,” and “Gloria Steinem, who is not only an icon here, of course, but all around the world” – another vast overestimate.

“I wanted to milk the soft power dividend of this moment,” Samantha Power says, ludicrously, in this car wreck of mixed metaphor and bureaucratese. But it was not to be.   Instead, “you really see what so many people went through, which was all of that sense of promise and excitement, and frankly, a dose of complacency. And then, it slowly dawning on us that not only was this going to be much closer than anybody anticipated, but that it was not going to end well… I think that scene moves viewers the most because it triggers, I think, a kind of post-traumatic stress about their own election night experience, which mirrored mine…”

The female ambassadors were doubtless as surprised as anyone by the election outcome.  But Samantha Power overestimates the emotional anguish in her big apartment that evening. These experienced diplomats were more likely thinking hard about the message they would send to their government later that night, on the implications of Donald Trump’s win for their own country’s national interest, while mentally writing off all those big contributions to the Clinton Foundation.

Obviously, “The Final Year” will be worth seeing for just – or only  –  this one scene, Samantha Power’s 2016 election night party with the female UN ambassadors. Within limits, it might even bear comparison with another exploration of political vainglory and delusion at a social gathering - Tom Wolfe’s 1970 essay “Radical Chic,” on Leonard Bernstein's party for the Black Panthers at his magnificent Manhattan duplex.